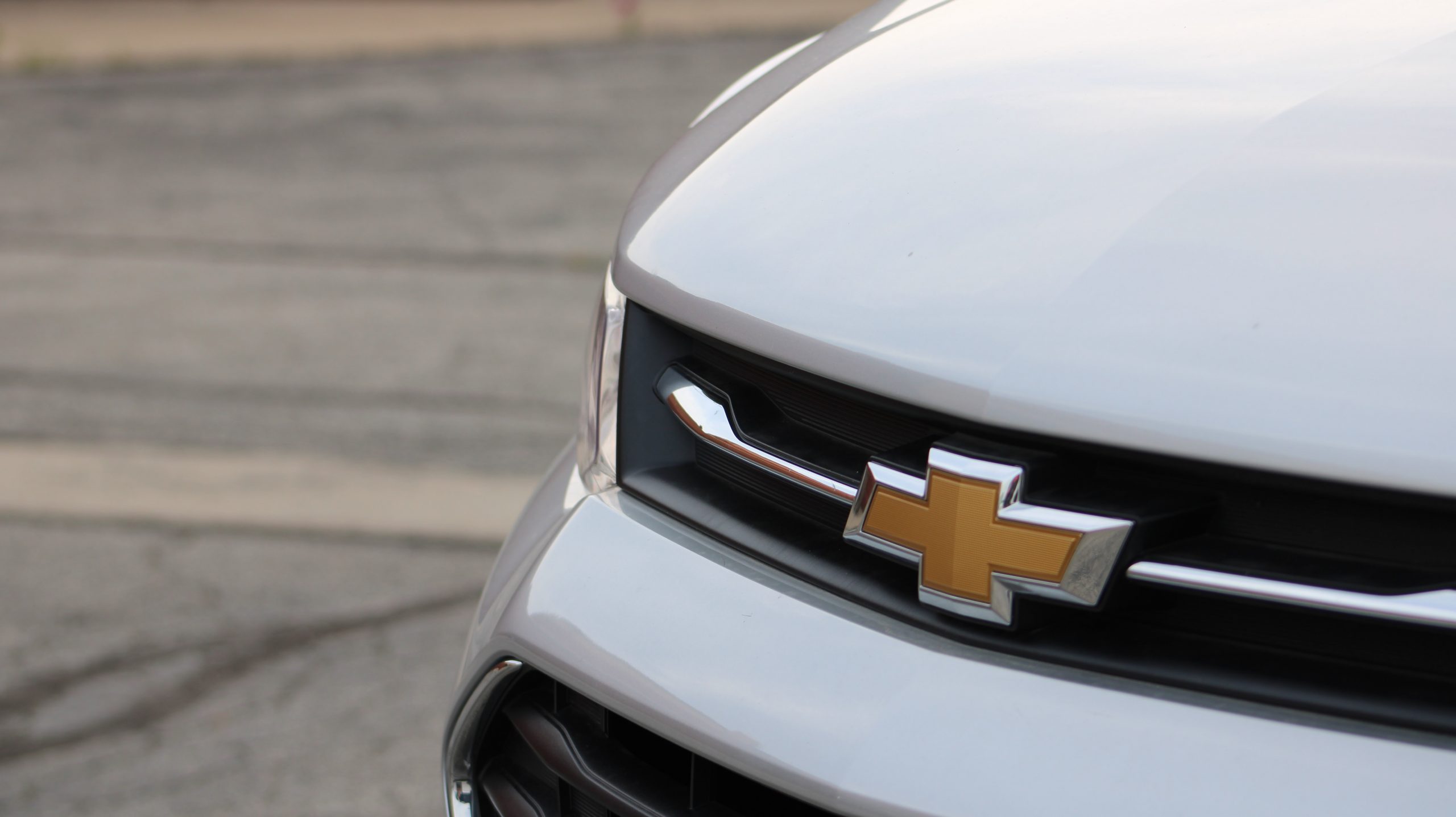 Are you curious to find out how rapidly your Camaro or Equinox can accelerate off the line? Swift acceleration is a key part of highway driving, and many drivers just enjoy the feel of a fast car. Here at Jim Tubman Chevrolet, we've taken a look at Chevrolet's diverse lineup of cars, crossovers, and trucks to identify which of these GM vehicles is the fastest from zero to 60 mph. 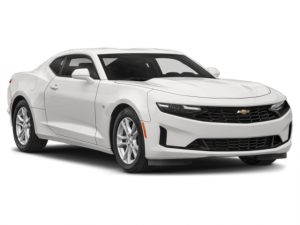 As one of Chevy's most popular sports cars, the Camaro seems like a good place to start. Even the base Camaro can shift from zero to 60 mph in an impressive 5.5 seconds, while the range-topping ZL1 trim does it in an incredible 3.5 seconds.

The Camaro has four engine options available. The base unit is a 2.0-litre turbocharged four-cylinder engine that puts out 270 horsepower. You can step up to a 3.6-litre V-6, which generates 335 horsepower. However, for the most power, you'll want to choose from Chevy's two V-8 options. The first is a 6.2-litre V-8 with 455 horsepower and 455 lb-ft of torque. Then there's the supercharged 6.2-litre V-8 that churns out 650 horsepower and 650 lb-ft of torque. 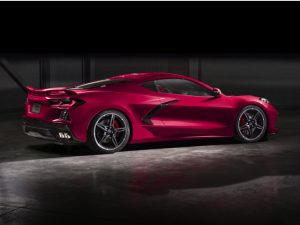 The Corvette is the Camaro's more upscale cousin, and it provides the best acceleration numbers in Chevy's lineup. The Corvette Stingray moves from zero to 60 in just 3 seconds and can complete a quarter mile in a little over 11 seconds.

The Corvette's speed is provided by a 6.2-litre V-8 that offers 490 horsepower and 465 lb-ft of torque. As you shoot off the line, you can relax in the Corvette's well-appointed cabin, which features leather and aluminum finishings. 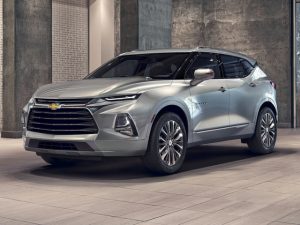 If your vehicle purchasing plans are aimed more at everyday practicality than raw speed, the Chevy Blazer is a good choice. This midsize SUV offers plenty of interior space for a family to travel together. It moves from zero to 60 mph in a steady 8.1 seconds.

You can choose between two engines in the Blazer. The first is a 2.0-litre turbocharged four-cylinder with 228 horsepower, which is fine for driving around town and accelerating up to highway speeds. For more acceleration and passing power, the 308-horsepower optional 3.6-litre V-6 is a wise choice. 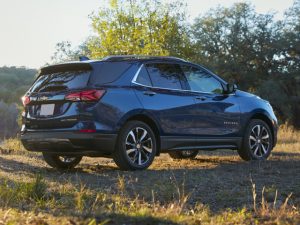 The more compact Equinox provides seating for five people across two rows. It can accelerate from zero to 60 mph in 8.7 seconds.

While you might be surprised to learn that the Equinox is slower off the line than the larger Blazer, keep in mind that the Equinox has a smaller 1.5-litre turbocharged engine. This unit gives the Equinox better fuel economy than the Blazer, but more moderate passing power. 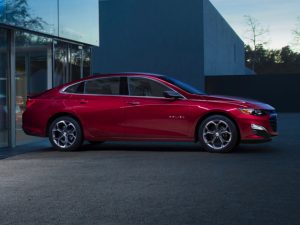 The Malibu is a midsize sedan with a trunk that provides you with over 15 cubic feet of storage. It can accelerate from zero to 60 mph in around 7.8 seconds.

The acceleration offered by this sedan depends to a large degree on the engine you choose. The base 1.5-litre turbocharged four-cylinder is a strong choice for city driving, putting out 160 horsepower. However, you'll probably want the larger 250-horsepower 2.0-litre turbocharged unit to get the most out of this sedan's speed. 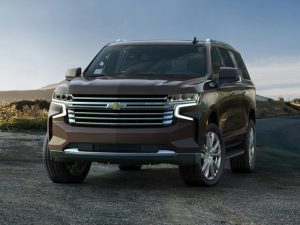 The Suburban and Tahoe share the same engine lineup. The base unit is a 5.3-litre V-8 that puts out 355 horsepower. You can step up to either a 6.2-litre V-8 that generates 420 horsepower or a six-cylinder diesel engine with 277 horsepower. The Suburban's acceleration is slightly slower than the Tahoe because it's a larger vehicle, giving you over 41 cubic feet of storage at the rear compared to 25 cubic feet in the Tahoe. 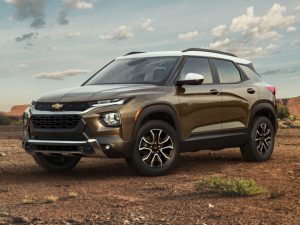 The compact Trailblazer is a crossover designed for fuel efficiency and city driving, so its acceleration numbers won't be the primary concern for most buyers. The Trailblazer can achieve zero to 60 mph in 9.4 seconds.

You can choose from two turbocharged engines in the Trailblazer: a 137-horsepower three-cylinder unit or a 155-horsepower option. The larger engine is a good choice if you plan on filling up this Chevy's relatively large cargo area, which can hold over 25 cubic feet of gear. 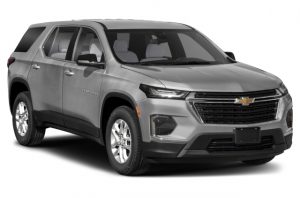 If you need a third row but don't want an SUV as large as the Suburban or Tahoe, the Chevy Traverse could be a great option. It moves from zero to 60 mph in just 6.4 seconds, which is impressive for a vehicle of its size.

The Traverse's solid acceleration is thanks above all to its 3.6-litre V-6 engine, which cranks out 310 horsepower and 266 lb-ft of torque. The standard Traverse has front-wheel drive, but you can add all-wheel drive for improved control and performance when towing. 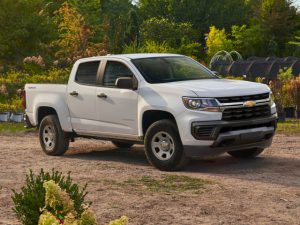 The Colorado is the smaller of Chevy's two truck options. This compact pickup can move from zero to 60 mph in 6.4 seconds.

The Colorado has a base 200-horsepower engine, with two upgrade options available. The first is a 308-horsepower V-6, while the second is a 181-horsepower turbodiesel. In terms of cargo-carrying options, you can choose between a long box measuring 6 feet, 2 inches and a shorter one measuring 5 feet, 2 inches. 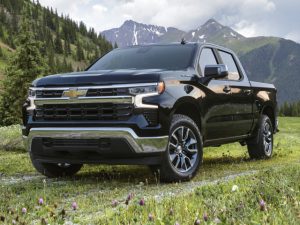 The larger Chevy Silverado 1500 is quicker off the line than the Colorado due to a more powerful engine lineup. It can manage zero to 60 mph in a mere 5.5 seconds.

The Silverado 1500 has various engines available, but the strongest two in terms of performance are the 420-horsepower V-8 and the 277-horsepower turbodiesel. You can also choose between three cargo bed lengths and cab styles, giving you the option of building an ideal work truck or a family-friendly pickup.

Now that you know more about how each vehicle in Chevy's lineup accelerates, why not drop by our Ottawa showroom to learn more about our cars, crossovers, and trucks? Our team of Chevy experts will be delighted to arrange a test drive or answer any of your questions. Contact us today at Jim Tubman Chevrolet to learn more.