Best Scenic Drives Near Ottawa, ON 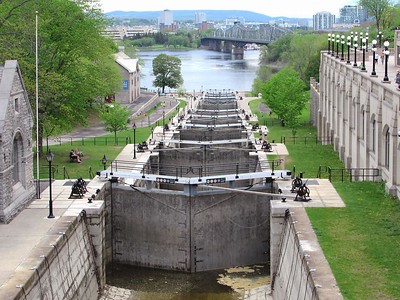 Ottawa, Ontario, is Canada's capital and is set amidst beautiful landscapes of forested hills, picturesque rivers, and other unique natural features. Ottawa's residents are lucky to live with such easy access to the outdoors wherever they go. You'll find nearby parks only minutes from downtown and scenic river views along the Ottawa River that divides Ottawa and Ontario on the southern side from the town of Gatineau in Quebec on the north. If you want to take off and enjoy the beautiful surroundings this weekend, check out one of these eight scenic parkways.

Champlain Parkway is a 15-kilometre route that branches off the Gatineau Parkway in the stunning Gatineau Park, which starts just across the river from Ottawa. You'll encounter several trailheads, picnic areas, and scenic overlooks along the parkway. The Champlain Lookout offers sweeping views over the Eardley Escarpment where the Canadian Shield and St Lawrence Lowlands meet. Along with views of the Ottawa River, the Étienne Brûlé Lookout provides access to hiking trails and a picnic area, making it a great spot to stop and stretch your legs. The Huron Lookout offers views stretching all the way to western Ottawa.

The Sir George-Étienne Cartier Parkway was originally named Rockcliffe Parkway, but this was changed in 2015. It was built in 1900 and runs for just over 19 kilometres east along the Ottawa River corridor. With sweeping river views, this is a magnificent drive that takes you past the Canada Aviation and Space Museum and the quaint, historic village of Rockcliffe. Then, it turns away from the river and wanders through scenic fields. Plans to renovate the riverfront portion of the parkway and adjacent trails and parklands are in the works. However, they are still some time away from breaking ground.

The Sir John A Macdonald Parkway is a four-lane scenic parkway that follows the Ottawa River west out of the city. The parkway starts near downtown next to the LeBreton Flats Park at the riverfront and ends near Britannia Park and Beach, with several scenic stops along the way. A lookout gives views of the Deschênes Rapids and the Aylmer Hydro ruins across the river on the Quebec side. The Kitchissippi Lookout looks over Westboro Beach with sweeping views of the river. It is an excellent place to catch the sunset or stop for a meal at Westboro Beach Cafe.

The Gatineau Parkway takes you on a scenic journey within Gatineau Park. The park lies across the river from Ottawa and is the second most visited park in the country. This area offers rich biodiversity, and at over 361 square kilometres, it is the largest park in the region. If you enter the park by taking Promenade de Gatineau off of Boulevard Alexandre-Taché, you'll soon be on the parkway. Along the drive, you'll come to the Gateau Park Welcome Area and Penguin Picnic Area. Pink Lake Lookout offers views over Pink Lake while a hiking trail takes you around.

The Colonel By Drive follows along a section of the Rideau Canal on its eastern side, and the Queen Elizabeth Driveway follows along on the west. Built in the 1800s, the Rideau Canal is a national historic waterway. The Queen Elizabeth Driveway was built in 1905 and runs from Confederation Park to Commissioner Park by Dows Lake, following the course of the canal. And the Colonel By Drive was completed in the 1960s and is 11.59 kilometres long. It passes by the University of Ottawa and ends near Hog's Back Park, where the canal meets the Rideau River.

Island Park Drive is a short scenic drive that takes you across the Ottawa River. From the north, you first cross over the Champlain Bridge before driving over several small, wooded islands on its way. The drive was built in the 1920s and continues to be an important route that passes by governmental embassies and prestigious residences. At the end of the drive, you'll come to the Central Experimental Farm, which is a National Historic Site and a popular tourist attraction in Ottawa's west end. This working farm and agricultural research facility also features an arboretum and ornamental gardens.

Gatineau Park is unusual in that it has several entrances into the park. One of these is the Philippe Lake Parkway which takes you 6.5 kilometres into the park to Philippe Lake and is the only access road to this area of the park with its gorgeous lakeshore beaches. The lake offers three sandy beaches where swimming is permitted. Parent Beach offers a playground for kids and also has a boat launch and rentals for non-motorized boats, making it a great place to stop and enjoy some beachside activities on a warm summer day.

Travel south of Ottawa to the St Lawrence River that divides Canada from the USA, and you'll discover the spectacular beauty of the 1000 Islands Parkway. This drive takes you along the river, where you'll find many quaint towns, picturesque islands, cozy bays, and river activities, including scuba diving and boat tours. Or stop at campsites and picnic areas to take in the river views. The 1000 Islands Parkway is accessible off the Macdonald Cartier Freeway and runs from Butternut Bay to Gananoque, where it rejoins the main freeway.

Ottawa and the surrounding area is a beautiful place with lots to explore. From green parks with lakes and hiking trails to historic structures and fun riverfront activities, there is so much to do to enjoy some summertime fun. If you're in the mood for a scenic drive, then we hope you take inspiration from this list and check out some of the places we've recommended. Have we missed your favourite scenic parkway? Contact us at Jim Tubman Chevrolet and let us know which drive around Ottawa you think is the most beautiful.

Rideau Canal by David Stanley is licensed with CC BY-SA 2.0