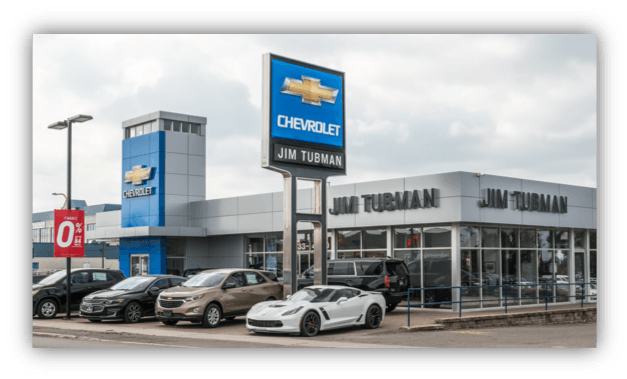 When Anne Harcourt was growing up in Ottawa, her father’s new car dealership was like a second home to her. She would accompany her father to the dealership after school and on weekends, doing odd jobs and observing the business from the sidelines.

“I knew from an early age that I would pursue a career in the retail automobile industry,” says Anne, President and Dealer Principal at Jim Tubman Chevrolet in Ottawa. “I’ve always viewed the car business as exciting and something I wanted to be part of.”

Anne began working at Jim Tubman Chevrolet part-time when she was 18, during the summer while she was attending college. She worked in service, sales, parts and administration, and she lent assistance wherever she was needed.

“It was a great experience working with my father,” she says. “He was a mentor and role model for myself and others, and he and I worked extremely well together.”

When Anne finished college, she began working full-time at her father’s dealership and she applied herself to learning all aspects of the business. “During those early years, I was often the only female on the floor or in meetings,” she recalls. “I’m glad to see that, after two decades, more women are working at dealerships than ever before, especially in senior management and ownership positions.”

Throughout her career, Anne has witnessed incredible advancements in automotive engineering, design, safety, performance, marketing and retailing. But the main priorities for Anne and her team at Jim Tubman Chevrolet have remained consistent from day one: fostering a positive work environment for her staff, and always going the extra mile for their customers.”

“Our dealership was founded in 1964 on the principle of treating staff and customers the way we would like to be treated,” says Anne. “We have always taken great pride in the relationships that we have formed with our staff, customers, and suppliers, and in the quality of our service. This has led to a consistently high percentage of repeat customers.”

In 2011, Anne’s father, John Harcourt, passed away suddenly, and Anne assumed the role of Dealer Principal. “I guess I had been preparing for that role for years, but it came about much sooner than I had anticipated,” she says. John Harcourt (whose father-in-law was Jim Tubman) started working at the dealership in 1969 in service, body shop and sales. He eventually became general manager and then a Dealer Principal.

Since becoming Dealer Principal, Anne has worked diligently to continue the legacy of giving, established by her father and grandfather. “One tradition that I’m most proud of is our community involvement,” says Anne, who also sits on the Board of the Ottawa New Car Dealers Association. “We support many local programs, amateur sports, special events and initiatives in an effort to make a positive difference in our community.”

Anne is also a strong supporter of education in the retail automobile industry, and she applauds the TADA’s initiatives to connect with students, teachers, educators and school boards across Ontario, to raise awareness about automotive careers. “We work with co-op automotive students from nearby Algonquin College,” says Anne. “One of our best Technicians actually started as an apprentice with us 30 years ago.”

Anne says attracting and retaining qualified young people to the industry is no less challenging today than when she began her career. “I’ve attended local job fairs, where students and parents walk right past our booth without giving it a second look, because auto careers aren’t on their radar,” she says. “we need to keep delivering the message that qualified men and women are needed in multiple disciplines, from accounting, HR and service advisor to sales, management and digital marketing.”

Whether it’s meeting with customers or forecasting for the next quarter, the day-to-day responsibilities of operating a successful dealership continue to energize Anne, who is just as passionate about the industry as when she started. “We sell automobiles and service, but this is really a people business,” says Anne. “It’s the daily interactions that I have with our staff and customers that motivates me to do my best.”

As for the future of Jim Tubman Chevrolet, Anne is confident that her dealership will continue to thrive by sticking to the principle that the dealership was founded upon – looking after her staff and customers. “My father taught me to treat others the way I want to be treated,” she says. “That’s a good life and work lesson, which I’ve tried to incorporate into my career.”

Anne is also bullish on the future of dealerships. “New car dealerships will play a vital role in the car ownership experience for years to come,” she says. “Automobiles are evolving all the time, and whether they are gas-powered, electric, hybrid, hydrogen or autonomous, vehicles will still need to be serviced and repaired at registered new car dealerships.”

Sales available after hours by appointment